Are you a Utah Filmmaker™? Join our Facebook group!

A Message from the Utah Film Commission:

Last week, there were two stories in the news about how film production In Utah has begun to crawl back and that more commercials are filming in Utah. We can all agree that none of us could have imagined the world we are living in now, but the Utah film industry has always been good at adapting to changing conditions. With our skilled crew members, professional vendors and diverse landscapes, Utah has the workforce and resources for any type of production.

When Utah began to reopen in May, the Utah Film Commission had already received 140% more production inquiries compared to the previous year and projects that postponed or delayed are starting to resume production in accordance with state and local safety guidelines. You can find a list of many of those projects that are starting to film in Utah in the Current Productions section of our website.

With the unique circumstances of the pandemic, hiring crews and vendors #InUtah and choosing to #FilmInUtah is the best way to keep our industry thriving and we need your help. We want all crew members and vendors based in Utah to update or register in the Utah Film Directory to show off your experience. Anytime the Utah Film Commission receives a production inquiry, we encourage those in-state and out-of-state productions to search the directory for talented Utahns and businesses in our film industry. Now, more than ever, it’s important for the industry to know the many Utah crew members and vendors that are ready to work.

We know that this has been a difficult time for the Utah film industry, but we are all in this together.

Our office wants to hear from you what more we can do to help! Email us at film@utah.gov or message us on Facebook, Twitter, Instagram or LinkedIn.
Posted by Utah Filmmakers™

Justus Page on the Director/DP relationship

The COVID-19 pandemic has forced states in the U.S. and countries around the world to shut down for months as the virus has spread globally like wildfire with no regard to national borders, social bounds, political systems, or cultural values. Major industries were advised to have their employees work from home as a mitigation effort to slow the spread of the virus in order to avoid overwhelming hospital beds and avoid unnecessary deaths, especially among our most vulnerable population: older adults.
While some industries were able to have their employees work remotely, other businesses were hit hard by the shutdown, including the film industry. It is estimated that 120,000 people have lost their jobs in Hollywood due to COVID-19, while 50,000 people will be losing their jobs in the United Kingdom. The film industry has also suffered a $4 billion hit at the box office and is expected to lose even more money from stopped productions. To top it off, most insurance companies exclude any coverage of infectious diseases, including COVID-19, painting a scary picture for the future of film and television production.
So, is it safe to work in film sets during a pandemic? It can be! And I will show what you can do to make film sets safe for the cast and crew while helping the film industry get back to doing what it does best. When I started working as a Public Health Safety Supervisor I did a lot of research to understand what the best measures would be to follow to minimize the spread of COVID-19 on film sets. I spent a good amount of time reading everything I could find from many well known and reputable organizations, such as the Centers for Disease Control and Prevention (CDC), World Health Organization (WHO), and Occupational Safety and Health Administration (OSHA). I also spent many days getting certificates related to COVID-19 from top-notch universities, the CDC and WHO, so I could feel prepared and capable of providing the most recent, up to date guidelines to my clients, and the best services to the people I was trusted to keep safe. And that is how I was able to be the first person in the state, or perhaps even in the nation, to develop COVID-19 guidelines for film sets, which I shared with the Utah Filmmakers™ Facebook group, and has since been replaced by the Utah Film Commission guidelines.
So now, after working on over a dozen productions during the pandemic, here is my take on how film productions can work safely on film sets today:
While I, as a public health professional, cannot warrant 100 percent that no one on set will ever get sick, I can assure you that by following guidelines from the Centers for Disease Control and Prevention, our state, and those widely accepted by the film industry we can effectively minimize the spread of COVID-19 on sets, while giving everyone the feeling of safety and care.
Adriele Fugal, MSPH(c)
Public Health Safety Specialist
Get your Safe Sets™ International Covid-19 Certificate
_____________________________________________

The opinions expressed in this blog are those of the authors and—especially where guest posts are concerned—do not necessarily reflect the opinions or views of the Utah Filmmakers™ Association, its officers and/or associates.

Lindsey Watson on going back to work

Things to consider when going back to work. 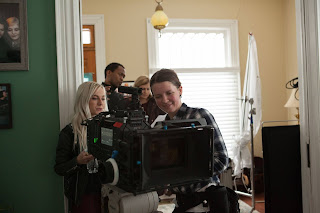 Liability waivers.
I can’t believe I even have to write this, but there is no more important precedent to set with the industry than our refusal to sign away our lives (literally) for the privilege of having work.
The “standard” 60-hr workweek has to go.
More hours does not equal more output. And more importantly, the harder we work, the more compromised our immune systems become, and the more likely we are to not only contract but also spread Covid-19.
Kit fees should be standard for everyone asked to work from home.
If you provide equipment that the production or a facility would have provided before, you should be compensated accordingly. This isn’t just about your main workstation, this includes your laptop, your phone to manage calls (and endless text messages) all day long, and also includes stipends to cover faster internet, electricity, printer toner, etc.
Additional Reading:
https://optimizeyourself.me/dear-hollywood-normal-wasnt-working/
https://www.wikihow.com/Know-if-You-Should-Sign-a-Waiver-of-Liability
https://www.cnbc.com/2019/03/20/stanford-study-longer-hours-doesnt-make-you-more-productive-heres-how-to-get-more-done-by-doing-less.html
https://hbr.org/2015/08/the-research-is-clear-long-hours-backfire-for-people-and-for-companies
https://www.ncbi.nlm.nih.gov/pmc/articles/PMC6617405/
_____________________________________________

The opinions expressed in this blog are those of the authors and—especially where guest posts are concerned—do not necessarily reflect the opinions or views of the Utah Filmmakers™ Association, its officers and/or associates.