Tell your state reps how the film incentive benefits you

This article in the Salt Lake Tribune has been making the rounds in the Utah film community. It does a terrific job of illustrating how much government incentives benefit local film industries and professionals but—regardless of the amount of money being discussed—one can only read so much about “tax credits,” “rebates” and “GDP” impact before one’s eyes start to glaze over.

As important and informative as this article is, there's one section that I think should resonate with filmmakers on a personal level. It starts with Virginia Pearce, Director of the Utah Film Commission, talking about “the crew member who gets paid, who takes his wife out to dinner, who buys a new car, who is able to live and work here instead of living and working in L.A….”

It quotes Taylor Sheridan, the filmmaker behind the Utah-based production “Wind River,” who said of his Paramount Network series “Yellowstone” that it “…employs hundreds of people, and the vast majority of them are local… And the ones who are coming in, they’re renting properties, they’re standing in line at the grocery store. They’re staying here. They’re moving in… We show up and spend an extreme amount of money, employ a workforce... And showcase the state.”

It’s one thing to read about the film incentive’s benefits to the local economy in abstract terms but I think what was missing from this article was a more personal perspective.

The Motion Picture Association of Utah exists to inform the Utah state legislature about how important the film industry is to Utah’s economy and how integral the Motion Picture Incentive Program is to bringing productions into the state and employing local filmmakers.

It’s imperative that state legislators also hear from the people who benefit directly from a thriving local film industry: their filmmaking constituents.

Utah Filmmakers* can support their industry and the efforts of the MPAU by contacting their legislative representatives by phone, fax, letter, and e-mail and letting them know how the film incentives directly impact their lives.

Don’t know who your legislative representatives are? That’s okay. I voted and I still had to double check—I guess state legislators are more camera shy than those in federal office. Just visit https://le.utah.gov/GIS/findDistrict.jsp, plug in your address/zip code to find out who your representatives are and tell them how important the film incentives are to you personally.

As individuals, Utah filmmakers do not need to talk about GDP growth or the return on the state’s investments. Talk about how much you love your job and being able to make a living doing it in Utah. Better yet, how a more active industry would enable you to work full time—if you don’t already.

Talk about how landing that gig on a film or series that made use of the incentive is what kept a roof over your head in Utah, enabled you to support your family, buy locally and to take a more active part in your community.

Who among us doesn’t have a story of how a job came through at just the right time to take care of the bills or an unforeseen expense. If that job wouldn’t have been possible without the incentive, you need to let your representatives know about it.

*As loosely defined by the Utah Filmmakers™ Association, “A ‘Utah filmmaker’ can be anyone based in Utah who’s involved in filmmaking including—but not limited to—Producers, Writers, Directors, Cinematographers, Animators, Actors, Sound Engineers, SFX/VFX Artists, Composers and many other technical and creative people.” 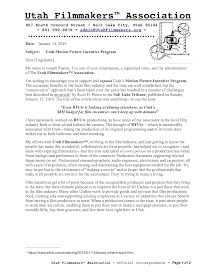 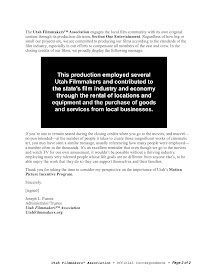